How to setup CDN for your DNS

A content delivery network consists of a network of servers that are optimized for quickly delivering content to users. Although CDNs are arguably best known for serving cached content, CDNs can also improve the delivery of uncacheable content. Generally speaking, the more of your site delivered by your CDN, the better.

When a CDN is used to deliver resources from the origin, a new connection is established between the client and a nearby CDN server. The remainder of the journey (in other words, the data transfer between the CDN server and origin) occurs over the CDN’s network - which often includes existing, persistent connections with the origin. The benefits of this are twofold: terminating the new connection as close to the user as possible eliminates unnecessary connection setup costs (establishing a new connection is expensive and requires multiple roundtrips); using a pre-warmed connection allows data to be immediately transferred at the maximum possible throughput.

Performance is typically a top consideration when choosing a CDN. However, the other features that a CDN offers (for example, security and analytics features), as well as a CDN’s pricing, support, and onboarding are all important to consider when choosing a CDN.

At a high-level, a CDN’s performance strategy can be thought of in terms of the tradeoff between minimizing latency and maximizing cache hit ratio. CDNs with many points of presence (PoPs) can deliver lower latency but may experience lower cache hit ratios as a result of traffic being split across more caches. Conversely, CDNs with fewer PoPs may be located geographically further from users, but can achieve higher cache hit ratios. 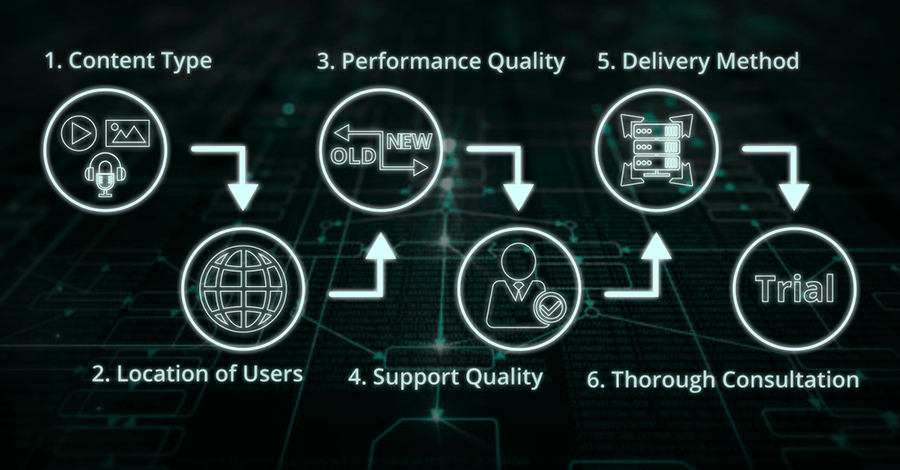 How to setup a CDN

Ideally you should use a CDN to serve your entire site. At a high-level, the setup process for this consists of signing up with a CDN provider, then updating your CNAME DNS record to point at the CDN provider. For example, the CNAME record for www.example.com might point to example.my-cdn.com. As a result of this DNS change, traffic to your site will be routed through the CDN.

If using a CDN to serve all resources is not an option, you can configure a CDN to only serve a subset of resources - for example, only static resources. You can do this by creating a separate CNAME record that will only be used for resources that should be served by the CDN. For example, you might create a static.example.com CNAME record that points to example.my-cdn.com. You would also need to rewrite the URLs of resources being served by the CDN to point to the static.example.com subdomain that you created.

Although your CDN will be set up at this point, there will likely be inefficiencies in your configuration.

Caching resources on a CDN’s servers eliminates the need for a request to travel all the way to the origin in order to be served. As a result, the resource is delivered more quickly; this also reduces the load on the origin server.

Adding and removing resources to the cache

The most commonly used method of populating CDN caches is to have the CDN “pull” resources as they are needed - this is known as “origin pull”. The first time that a particular resource is requested from the cache the CDN will request it from the origin server and cache the response. In this manner, the contents of the cache are built-up over time as additional uncached resources are requested.

Setting up CDN for your website or web apps is highly recommended as it will optimize the server load, website loading speed and improves performance quality. TheStack is one of the best web hosting providers that offer premium shared web hosting, cheap dedicated server hosting, VPS server, WordPress hosting, server management and monitoring and DevOps support services. Be assured with our services and reach out to our team of experts to know more.