How to Set Hostname on CentOS 8/RHEL 8

Why do we need Hostname?

Typically the hostname is set during the installation of the operating system or dynamically assigned to the virtual machine when it is created.

There are a number of reasons why you may need to change the hostname. The most common is when the hostname is automatically set upon the instance creation.

A hostname is a label that identifies a device on a network. You shouldn’t have two or more machines with the same hostname, on the same network.

There are three classes of hostname: static, pretty, and transient.

It is recommended to use a fully-qualified domain name FQDN for both static and transient names such as myweb.thestack.net.

Note: If logging in as a user other than admin or root, you will need to use sudo command to gain root access.

To view the current hostname, execute the following command:

In this example, the current hostname is set to myweb.thestack.net.

In CentOS 8 and all other Linux distributions that are using systemd, you can change the system hostname and related settings with the hostnamectl command. For example, to change the system static hostname to myweb.thestack.net, you would use the following command:

To set the pretty hostname to thestack.net, enter:

The hostnamectl command does not produce output. On success, 0 is returned, a non-zero failure code otherwise.

nmtui is a curses-based tool for interacting with NetworkManager. It can also be used to set or change the hostname.

Launch the tool by typing its name in the terminal: 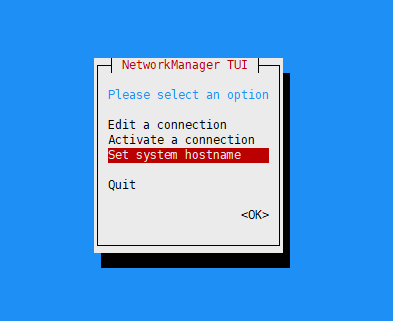 Use the arrow keys to navigate through the options, select Set system hostname and press Enter: 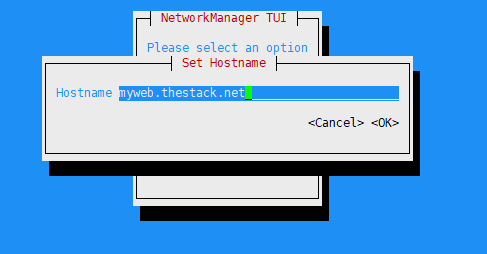 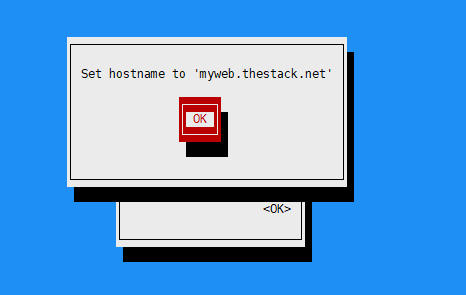 Finally, restart the systemd-hostnamed service for the changes to take effect:

nmcli is a command-line tool for controlling the NetworkManager and can also be used to change the system’s hostname.

To view the current hostname, type:

To change the hostname to ‘myweb.thestack.net’ use the following command:

For the changes to take effect, restart the systemd-hostnamed service: